Newcastle have little left to play for this season but their guests Arsenal are on the cusp of a return to the Champions League and really can't afford to drop any more points. This Premier League game takes place on Monday 16th of May and kick-offs at 20:00 GMT at St James's Park, Newcastle.

Arsenal have won each of their last eight head-to-heads with Newcastle in all competitions, including a 2-0 win at the Emirates earlier in the season. Newcastle have lost their last two matches without scoring a single goal, going down 5-0 away at Man City last time out, while Arsenal have won four of their last five fixtures but will be looking to bounce back from a disappointing derby day defeat on Thursday.

Saka top scores in the league for Arsenal this season with 11-goals and we're backing the England international to score at St James's Park on Monday night. The 20-year-old has gone from strength to strength this season and is now an integral part of the Gunners' starting eleven. With 3-goals in his last nine appearances in the Premier League, the midfielder is always a goal threat from open play and takes penalties.

Newcastle vs Arsenal: Everything you need to know

Newcastle weren't fancied to do much at the Emirates last weekend and although they came close to breaking the deadlock, it was Man City that went in front in the 19th-minute through Sterling. Laporte added a second goal before the break and just after the hour mark, Rodri scored a third for the home side. There was still time for Foden to make it 4-0 in the last minute and in stoppage-time, Sterling bagged his second of the game to wrap up a convincing 5-0 victory for Man City.

Arsenal made the short trip down the road to Tottenham on Thursday night for a game that would have its impact on Champions League qualification. Spurs were simply too good for the Gunners on the night with Kane converting a penalty before Holding was sent-off for a second bookable offence and the Tottenham captain netted his second of the game before the break. Son scored early in the second half to end any faint hopes Arsenal had of taking anything from the game and now the gap between the two clubs has been reduced to just a single point.

Newcastle: Fraser, Hayden, Shelvey, Willock, Fernandez and Lewis are the main injury concerns for the hosts.

Arsenal: Tierney and Partey are all possible doubts for the Gunners, while Holding misses the game through suspension. 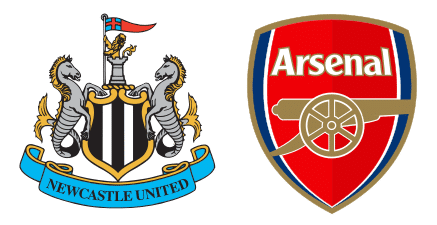