The first game to be played on Saturday in the upcoming La Liga round is the Alaves vs Celta Vigo duel. With that in mind, we have prepared a preview of the match for you, along with free betting predictions.

Our top Alaves vs Celta Vigo betting picks and tips

Alaves and Celta Vigo to Draw

Both Alaves and Celta Vigo are in similar forms, but Alaves has been particularly great lately since they are without a loss in the last five matches in the league, during which they've won three games.

However, Celta is the better team on paper and they've beaten Alaves in their last three h2h duels. So, all things considered, a draw in this match sounds like the most reasonable outcome.

Alaves and Celta Vigo to Draw at Half Time

Since we expect these two teams to draw in this match, we also expect them to be tied at half time. After all, that is the usual way for these matches to go.

In addition to this, Alaves drew at half time in four of their seven La Liga matches this season, while Celta Vigo did the same in eight of their fourteen games in the league until now.

We did not see both teams score in any of the last five meetings between Alaves and Celta Vigo – but traditions are there to be broken, right?

So, our prediction is for both teams to score in this game, purely based on a hunch, since this happened in just 31% of all Alaves matches so far and 36% of all Celta Vigo games in La Liga.

The latest odds, stats, and more for Alaves vs Celta Vigo

If you wish to bet on the best Alaves vs Celta Vigo odds, check our list of odds taken from the top bookmakers:

With three wins and two draws in the last five games, Alaves soared up the standings to reach the 14th spot after being down in the relegation zone for much of the season. These impressive results include draws with Sevilla and Barcelona, both away from home, so it's clear that Alaves fans have a lot of reasons to be happy right now. Navarro is the only player on the team's injury list at the moment.

It's been a tough season so far for Celta Vigo since the team is currently sitting in the 15th place, with one point fewer than their next opponent in the league. In fact, Celta Vigo is in very poor form at the moment since they've failed to win in the last five matches in the league. On the bright side, the team has a clean bill of health right now. 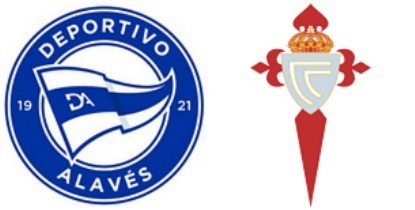