Danny Cowley's contract at Portsmouth is only a temporary deal to the end of the season. If he's looking to stay on as manager then he'll need to be winning games like this one against Accrington. Will they? Find out with our Accrington vs Portsmouth match preview with free tips, predictions and odds mentioned along the way.

Accrington vs Portsmouth: Your top tips

Portsmouth might have their playoff hopes hanging by a thread at the moment but their win over Bristol Rovers ended a run of four games without a win and a trip to an Accrington side that have patchy home form at best is a good opportunity to add another three points to their tally. Accrington have been a real mixed bag of late, which pretty much sums up their season. In their last five matches they've drawn with Sunderland but then been thrashed by Wimbledon and turned over by Rochdale – two teams who still have relegation looming over them. If Pompey turn up with the right mindset then they'll win this game.

There will be a fair few goals

Accrington might sit comfortably in mid-table but they still tend to offer up games worth watching; particularly at the moment. Their last five matches have served up a rather ridiculous 18 goals, which means they've averaged 3.6 goals per match. Portsmouth's games haven't quite hit the same heights with just two of their last five going above the 2.5 cut off but their strike force, which has scored 59 goals this season should be more than capable of netting a couple against what is the worst defence in the top half. Of course, Accrington will look to attack Pompey too and six goals conceded in their last five means they're ‘gettable'.

The last of our tips is backing Portsmouth to run out 2-1 winners. We've been clear with our predictions that we expect the south coast club to win the game but with shaky form coming into the match they're unlikely to blow Accrington away. 2-1 has been a popular score line with Portsmouth of late too; they've won three games by that margin in their last 10.

Portsmouth to win as playoff race hots up

At the start of the season Portsmouth were one of the hot favourites for promotion. Now though, with just a few games left, they're in a shootout for the playoffs. Their place in the top six is far from nailed on as well. They need to take it game by game now and standing in their way next is Accrington. Accrington aren't fools but the way this match plays out will be all on Portsmouth.

Accrington vs Portsmouth: A brief summary of questions 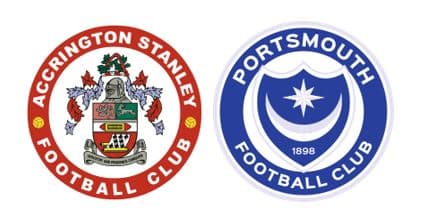