AC Milan saw their 100% record in Serie A come to an end at the weekend but they still remain unbeaten this season. Next up for AC Milan is a home game against newly-promoted Venezia who currently sit fourth from bottom and are looking to bounce back from their weekend defeat at home to Spezia.

Here are our predictions for AC Milan vs Venezia

AC Milan have won four of their last six matches against Venezia but the pair haven't locked horns since 2002. The hosts have won four of their last six outings in all competitions and have kept two clean sheets in their opening four league games. Venezia have lost three of their opening four games and have failed to score in two of their three away games this season.

We're not expecting a lot of goals in this game as it looks like AC Milan will be without both Giroud and Ibrahimovic on Wednesday night. Under 2.5 goals have been produced in two of the last three meetings between these two clubs, while fewer than three goals have been scored in three of AC Milan's last fix fixtures.

As for a final scoreline, we're backing AC Milan to secure a 1-0 win on Wednesday. Why such a low scoreline? Well, Ibrahimovic and Giroud look set to miss this game through injury, putting more pressure on Leao and Rebic to score the home side's goals. Even with those two experienced strikers out, AC Milan should have more than enough in their side to carve out a narrow victory with a clean sheet to boot.

AC Milan made the trip to Juventus at the weekend aiming to make it four wins from four games in Serie A. However, an early goal from Morata put the home side in front and AC Milan had to wait until the 76th-minute before Rebic made the scoreline level. Despite losing their 100% record, AC Milan remain unbeaten and look like they could challenge for the title once again this season.

Venezia must have fancied their chances of banking 3pts at the weekend when they played host to Spezia but an early goal from Bastoni set the tone of the afternoon. Ceccaroni managed to equalise for Venezia around the hour mark and looked like he had secured a point for the home side until Bourabia silenced the home fans with a winning goal for Spezia.

AC Milan: Calabria, Giroud, Ibrahimovic, Krunic and Bakayoko are all injury concerns for the game against Venezia.

Venezia: Luca Lezzerini and Luca Fiordilino will miss the trip to Milan through injury. 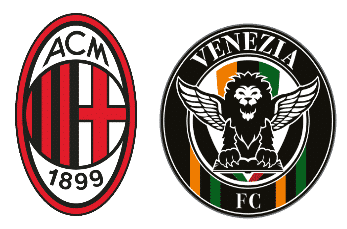