AC Milan are right back in the title race after defeating local rivals Inter in the Milan derby. This weekend, AC Milan play host to relegation Serie A relegation battlers Sampdoria in a game the home side are expected to win comfortably.

Everything you need to know about AC Milan vs Sampdoria

AC Milan followed up their excellent 2-1 win over Inter Milan by knocking Lazio out of the Coppa Italia in midweek. AC Milan dominated the tie from beginning to end and found themselves 3-0 up at the interval thanks to one goal from Leao and a Giroud brace. In the second half, Lazio tightened things up somewhat but could find a way past the AC Milan defence and when Kessie added a 4th goal 11-minutes from time, it was all over for the visitors.

Sampdoria secure a vital 3pts with one of their best performances of the season at home to Sassuolo last weekend. Caputo opened the scoring after just 5-minutes and a further 2-minutes later Sensimade it 2-0 to the hosts. Conti added a third goal in the 63rd-minute and a stoppage-time penalty from Candreva wrapped up an impressive 4-0 victory. Sampdoria sit 5th from bottom as things stand but could move up one place this weekend if they can find a way to beat AC Milan.

AC Milan: Hernandez is suspended, while Gabbia and Ibrahimovic could miss out through injury.

Sampdoria: Schiavone and Coulibaly are the main concerns for the visitors this weekend.

AC Milan vs Sampdoria – Your Questions 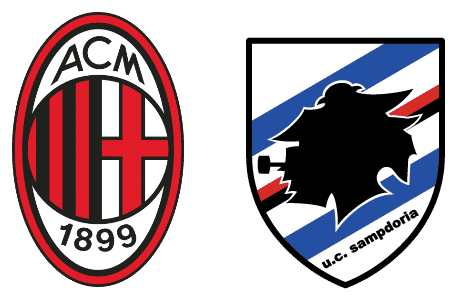