Another game scheduled for Saturday, October 22nd in Serie A is the AC Milan vs Monza duel, so make sure to check our detailed preview of this match and our free predictions for it.

If you are looking for the best Serie A betting predictions, including those for AC Milan vs Monza, you can find them right here:

AC Milan to Lead at Half Time and Win

The difference in quality between these two teams is clear, but Monza is actually in very good form at the moment since they won three of their last four games.

However, AC Milan won five of their last six games in Serie A and we expect them to continue their good run in this match as well by beating Monza after leading at half time as well.

Rafael Leao to Score at Any Time

Although Rafael Leao scored just four goals in Serie A this season, he is one of the top scorers for the defending champions, along with Olivier Giroud.

And since we expect Milan to score more than once against Monza, we can see Leao adding to his tally and climbing up a bit on the list of top scorers in Serie A this season.

The Best Odds and Stats for AC Milan vs Monza

If you don't want to look for the top AC Milan vs Monza odds and stats all over the internet, you can check them here, on our website:

The home team is the clear favourite here, but this can still be an interesting match. Let's take a look at the teams now:

The defending champions of Italy are in good form at the moment with five wins in the last six games in Serie A, thanks to which they've gotten to the third place in the standings and just three points behind Napoli, the league leaders. However, the Rossoneri are not in a great spot in Champions League, where they won four points from four matches.

After initial struggles, the newly-promoted team got on a tear and won three games in a row before their streak ended in the last round with a loss to Empoli. In any case, Monza showed quality lately and had some impressive results, like a win over Juventus. The team is currently at ten points and five points away from the relegation zone.

Meanwhile, Monza will miss injured Luca Marrone and Andrea Ranocchia in the next game, as well as suspended Nicolo Rovella. 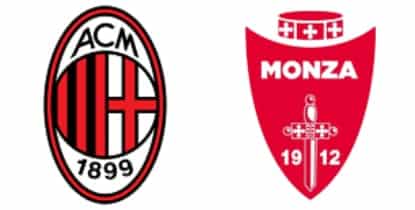