The next game between Valour and Atletico Ottawa will be played on the 2nd of June. Continue reading to find the top betting lines and predictions for Thursday.

Below, you can check out the top predictions we have for the event, and you can see the top betting lines and picks, as well. All odds are from BetMGM and are correct at the time of writing. Make sure to double-check them before wagering.

Information About the Teams’ Lineups for Thursday

In this section, you can check out the most recent player injuries and suspensions for both teams.

Only Raphael Ohin from Valour is injured and won't make it this weekend. Other than him, there aren't any suspended players or other injuries on the squad.

Atletico Ottawa doesn't have any injured or suspended players on their squad, so they will be playing at 100% this week.

Recent Team Form & Statistics for the Upcoming Match on Thursday

Here, you can take a look at the head-to-head data for the Valour vs Atletico Ottawa match this week.

Our Final Conclusion About the Fixture

For Thursday's game, we think that the final outcome will include a win for Valour, like in so many of their previous and most recent head-to-head matches. We also think that we will see more than a few goals scored during the game itself. 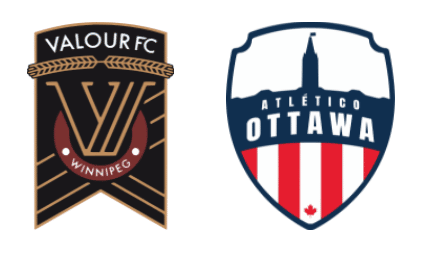 Commonly Asked Questions Regarding the Match