Today, we will check out the latest Atletico Ottawa vs York United predictions, betting picks, and odds. You can also check out our other Canadian Premier League predictions on the website.

Below, we have listed the top picks that our team of experts could come up with about the Atletico Ottawa vs York United fixture on Sunday. All odds are from BetMGM and are correct at the time of writing. Check the odds before confirming because they are also subject to change.

These two teams played together a total of ten times and eight of those matches ended without a winner. There is a very high chance we will see that same outcome on Sunday, as well. Three of the last five games for Atletico Ottawa ended with draws, too, and York United has had six draws this season.

Injury Reports and Suspensions for Atletico Ottawa vs York United

Here, you can check out the latest lineups and injuries for both teams before the Sunday game.

Austin Ricci and Martin Graiciar are the only sidelined players from York United at this time. There aren't any suspended ones, but there are two players at risk of suspension with four yellow cards.

Below, we have presented you with the most recent match histories and head-to-head statistics for the Atletico Ottawa vs York United fixture.

Atletico Ottawa has already qualified for the semi-finals but York United has been circling the bottom of the Canadian Premier League for the whole season, and they won't be advancing forward. We think that the match on Sunday will end without a winner, like so many games they played together, and that there will be more than 2.5 total goals scored. 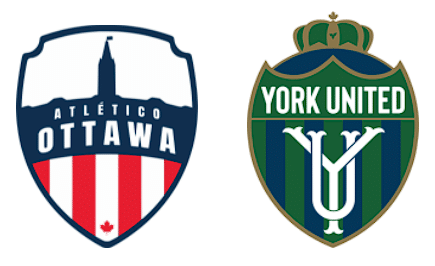