New York City will be facing Toronto this weekend on the 24th of April, and we will check out the match to find the best predictions and free betting picks. If you want to see more MLS free picks and predictions, have a look at our website's latest content.

The Top Predictions & Latest Betting Lines for the Match

We went through the data to find the best predictions and free picks for the New York City vs Toronto match. All odds are from BetMGM and are subject to change, so make sure to double-check them before you place these bets.

Injuries and Suspensions for New York City vs Toronto on Sunday

Check out the latest footballers that won't be able to be on the field this Sunday because of various reasons.

New York City has only one injured player – defender Anton Tinnerholm who is out with an Achilles Tendon injury since last fall.

All of Toronto's injuries have healed and we may see a lineup that includes players we haven't seen for a while.

We gathered all the recent head-to-head data and scores for New York City and Toronto below. You can also find the top bookmaker odds.

Preview of the New York City vs Toronto Fixture

A win for Toronto and both teams scoring goals are our two most likely predictions for the upcoming New York City vs Toronto game. If Toronto is lucky, they have a chance to go up to the third position in the table. Of course, that will only be possible if the other teams with eleven points, so far, lose or draw their next matches. 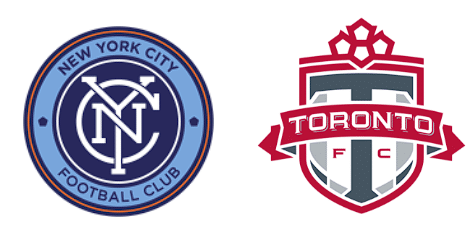 Common Questions Regarding the Match this Weekend