Philadelphia Union and Minnesota United will have the high honor of opening the season in MLS and we are certain they will bring their A-game to satisfy the fans!

These are amongst the best clubs in the MLS and they had a very solid performance in the last season. Our soccer experts believe the following predictions best grasp the nature of this clash. Check BetMGM for the latest odds as the ones we provide are subject to change.

The two clubs didn’t miss the chance to exchange goals in any of the 4 games that were played between them. This is the opening game of the season in the MLS and we expect the players to be stress-free and show the best possible face. Minnesota United had a good pre-season with a lot of goals – 2:2 against Viking and a 4:5 away victory against Orlando City.

Lineup data for the Philadelphia Union and Minnesota match

A lot of squad issues for both sides will put the decision-making capabilities of the two coaches to the test.

The only issue for coach Adrian Heath is the suspension of the key left-back Chase Gasper. The team allowed a lot of goals with Gasper in the starting 11 in the pre-season friendlies so we expect the defense to do poorly against Philadelphia. Tyler Miller will not score a clean sheet in this game.

The list below will provide you with the most important H2H statistics and odds out there:

Home victory at the start

It’s not only that the history between the two clubs is such but Philadelphia Union is the better side overall and last season’s 2nd place confirms that. Nevertheless, the home team shouldn’t lose focus in this game as the few injury issues might turn the tables around at the end of the 90 minutes. We are confident that the home team knows how to achieve a narrow 2:1 victory. 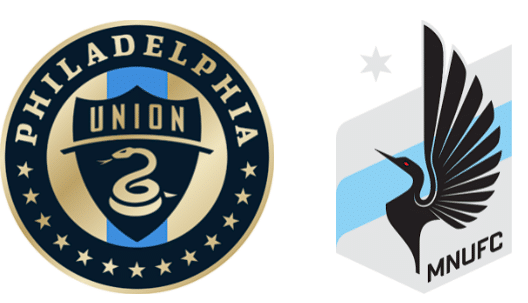 FAQ about the upcoming Philadelphia Union vs Minnesota United game: