Today, we will check out the Clausura with the Liga MX fixture between Monterrey and Atletico San Luis, which will be played on the 27th of February. Here, you can find out the top betting picks and odds for the game among other useful information.

Our bookmakers managed to review the upcoming match and came up with the following match predictions and tips for the game at the end of this week. These odds are from BetMGM and are subject to change. Before placing bets make sure to double-check your bet slip.

Info About the Lineups for Monterrey vs Atletico San Luis

Let's see how the managers will tweak the lineups and how everything would go with the players that are missing.

Monterrey doesn't have any injured or suspended players on their roster, so their manager will have a full pick to choose from for this weekend.

Atletico San Luis doesn't have any injured players, but one of their guys is suspended with a red card suspension. Midfielder Juan Manuel Sanabria received a red card and two yellow cards in the team's last match against Tigres UANL.

Head-to-Head Statistics and Bookmaker Prices for the Match

In these tables, you can check out the latest match statistics and odds for the upcoming match between Monterrey and Atletico San Luis this week.

Final Preview for the Monterrey vs Atletico San Luis Fixture

Monterrey is in a better shape to go against Atletico San Luis and we think they will beat them this weekend, which will give them a chance to enter the play-offs stage of the Clausura, as long as luck is on their side. There is also a chance that both teams score during the match, like in many of the recent head-to-head fixtures these two played together. 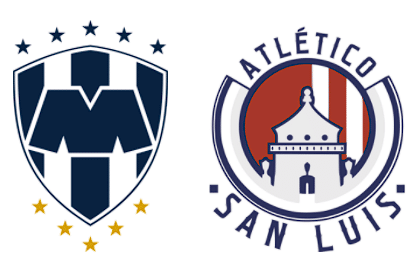