With yet another thrilling AFL season underway, we cannot help but focus on who the leading players are, and what currently makes them so special. Of course, there have been some true greats of the AFL over the last few decades, but rather than take a trip down memory lane, we’d like to keep things as fresh and relevant as possible. This is why we’ve broken down our top 10 AFL players for the 2021 season right here, and let us tell you now – some of the statistics these guys have to their names are just incredible.

It’s all rather exciting, so without further ado, let’s get the ball rolling with player number one. 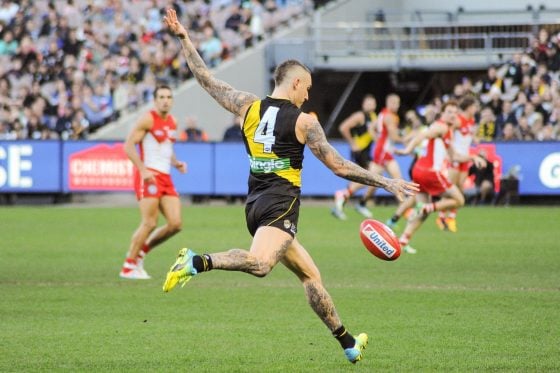 We may as well kick things off with the best of the best, in the form of Dustin Martin. Not only are this man's statistics absolutely off the charts, quite literally, but his list of accolades is so long it’s hard to know where to begin. Dustin Martin has been listed into the All-Australian team on 4 separate occasions, he’s been the MVP for Richmond 3 out of the last 4 seasons, and as we now head into another season – he’s looking better than ever. Having now passed the decade mark for Richmond, his current tally stands at 277 goals in 250 games, and dare we say it – he is on track to potentially be viewed as one of the top AFL players of all time.

Needless to say, he absolutely deserves his spot on our top 10 AFL players list, and at just 29 years of age, there is still a bright future ahead of Martin.

Coming in at number two we have Christian Petracca, an epic midfield-forward player that is just as versatile as he is strong and intimidating. Standing at 6ft 1 and weighing more than 210lbs, he’s a figure that you can just tell means business, which is probably why Melbourne loves getting him in the thick of things against rival teams. Apart from his size and stature, Petracca is one of the top 10 AFL players to watch on the field, never mind the statistics and figures backing this up. Not only is he another player that has been named into the All-Australian AFL team in the past, but he has also been given the AFL Rising Star nomination during his early days – which have now proved to be just the very beginning of what he is capable of.

At the time of writing, he has played 109 games for Melbourne and scored almost as many goals!

Speaking of rather imposing figures, you won’t find much scarier than Max Gawn. He’s certainly not a guy you want to upset on the pitch, at 6ft 10 and almost 240lbs. But it’s also this size that makes him one of our top picks, as he is incredibly effective when it comes to forward play, and of course – the rucks. Without question, Gawn joins Petracca as one of Melbourne’s best players right now, which is probably why he is also the captain of the team – an honour handed to him in the 2020 season. And when it comes to accolades, the one that speaks most is probably the fact that Gawn is a four-time All-Australian player, which puts him right up there with some of the very best.

Here we have another newly named captain in the form of Jack Steele, a player that is really bursting through the ranks right now. At just 25 years of age, he has plenty of room for growth and improvement, and he is already viewed as one of the top 10 AFL players! Up until the 2016 season, Steel played for GWS, but it became public knowledge that he wanted a trade to continue his career with a club that would see his true value – which is where he discovered St. Kilda. Since joining, Steele has put in some record-breaking seasons as far as tackles, disposals, and clearances go, and he will only get better from here.

Toby Greene is currently viewed as one of the most dangerous forwards in the AFL. He’s quick, he’s sharp, he’s talented, and he’s experienced – having played for GWS since 2011. When you get a mix of such ingredients and blend them together, the end result is always going to be something fairly special, and this is absolutely true with Greene. Over the years Green has racked up ‘rising star’ trophies, All-Australian mentions, and so much more. Oh, and we almost forgot – he’s an incredible kicker too! The only thing missing for Greene is a cabinet full of AFL trophies, which we are sure he will be seeking in the 2021 season.

Lachie Neale is one of the best there is, probably inside the top 3 if we are going to be completely honest. Neale is the winner of the prestigious Brownlow Medal, handed to him in 2020, and he beat some serious competition to earn this significant accolade along the way. Of course, he now plays for the Brisbane Lions, but some might argue that he received the boost he needed while enjoying his time at Fremantle – a team he played at between 2012 and 2018. While yes, he was a great player at Fremantle, we would argue that Neale has really demonstrated what he is capable of in his most recent two seasons, a time where he has won the Marcus Ashcroft Medal, the Leigh Matthews Trophy, the Merrett-Murray Medal, and so much more.

Player of the year, three-time All-Australian team, recipient of the rising star award in his youth – is there anything Bontempelli hasn’t got? The achievements of this player really do make him deserve his spot in our list of top 10 AFL players, and his skills are even more impressive than his accolades. He is currently the captain of the Western Bulldogs, and thanks to his leadership capabilities, they are a team that has a very realistic chance of winning the AFL this year. Through a combination of goalscoring, disposals, and some incredibly creative plays, Bontempelli is absolutely critical in his current role, and we love watching him at his best! 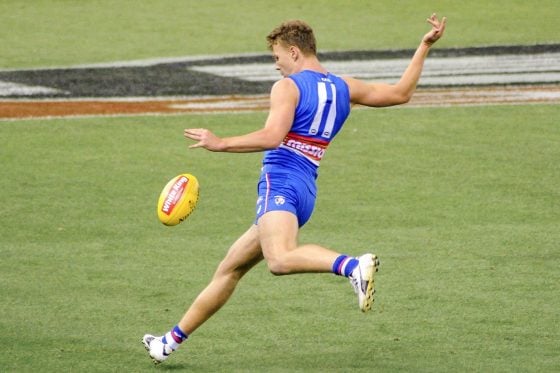 Jack Macrae is another terrific player that serves under the captaincy of Marcus Bontempelli, mentioned above. Sure, he might not be the greatest goalscorer out there or the most intimidating player, but these aren’t the roles that Macrae has proved to be so effective in. In fact, it’s his all-around skills that justify his spot on this list. Whether he’s darting around on the outside or using his incredible hand-skills in the infield, it’s almost impossible to track what Macrae will do next. This is probably why he has been named into the All-Australian team for the previous two years, and we suspect he could well earn another nomination this season. With the Bulldogs currently in second, behind Melbourne, we just know that Macrae will be hungry to drive his team and overtake them.

Naitanui has been around for quite a while now on the AFL scene. He has remained loyal to the West Coast Eagles throughout his impressive career, and over the years he has scooped up All-Australian picks, the John Worsfold Medal, and let’s be honest – you would pick him for just about any ruck that was taking place in any game! It’s not like he’s a player that lets his competitive streak get in the way of his ethics either, as he is one of the fairest players out there, with very few confrontations and arguments with anyone – not even the referees. Given that Naitanui is now 30 years old, some might say he is approaching the twilight of his career, but then again, since when does age play a factor these days?

While most of the other guys on our list of top 10 AFL players have received an abundance of awards and recognition, Merrett is a guy that has glided under the radar really. He doesn’t have a cabinet full of trophies, he doesn’t have a resume of countless goals, and he doesn’t play for one of the top teams. But we believe not only is Merrett one of the most improved players, we believe that what he is able to do on the pitch, considering that he isn’t surrounded by other superstars in his team, makes his play all the more impressive. He’s a very clever and skilful player in the middle of the field, and at just 25 years of age, he still has time to develop his game further. Who knows, maybe he will overtake the records of some of these other guys in the future? Only time will tell. Interested in the A-League more than the AFL? Check out our pick of the top A-League players.