Brisbane Roar focuses to continue the form of the previous home win when they host Melbourne Victory in the next A-League engagement. The Boys in Blue also follow the sequence of four consecutive away outings.

Melbourne Victory is the only team at this time to have 12 undefeated games in a row and won the last two in a row ahead of this game. However, Brisbane doesn’t have acceptable stats in the recent games, winning only one in the last seven attempts. The Roar have also lost three of the last four home duels. In the H2H2s, Victory ruled in the visiting H2Hs and registered victory in four of the last five visits to Brisbane Roar. So Melbourne Victory seems prepared to add three more points to their name on this trip.

Brisbane Roar were effortless in the recent H2Hs and failed to score in each of two. The hosts also didn’t score in two of the five attempts. However, Melbourne’s front line was optimistic in all of the recent away outings and rattled the net consistently. At the back end, the Big V also secured three clean sheets in the previous five league games. So in our opinion, Melbourne Victory will be the only team to have the name on the score sheet at the end.

Brisbane Roar vs Melbourne Victory: Check out the best odds and the latest stats

Brisbane Roar vs Melbourne Victory: Check out the team lineups

After having three undefeated games in a row, the Roar returned to their losing track in the last game against Macarthur, giving the lead in the 89th minute. Brisbane Roar has confirmed only six wins in 22 league games together with 12 defeats and stands eleventh on the table. Connor Chapman will not be able to enter the field due to an injury issue.

The Boys in Blue extended their away winning series in the previous game against Macarthur by winning with the 1-4 lead. Getting 11 wins and eight draws in the 23 league attempts, Melbourne Victory are at the third position in the points table. Robbie Kruse will be out of the playing squad for this game due to a knee injury. 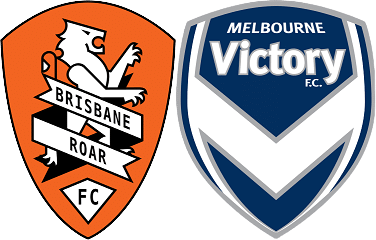 Who are the players to watch out for? Juan Lescano (Brisbane Roar) and Lleyton Brooks (Melbourne Victory).