The battle for the A-League pole position intensifies as Adelaide United hosts Sydney FC at Coopers Stadium. Both sides are within three points of pole position and will be confident in their abilities with victories in their last outings.

Adelaide United occupies third place on the points table as they trail leaders Melbourne Victory by a single point. They can leapfrog Victory with a win over Sydney, a feat they have only managed twice in 18 A-League attempts. The Sky Blues will be difficult to tame after getting back in their element following a slow start. Their form on the road is nothing to be trifled with two wins and a draw from their last four away fixtures. Given their better H2H form coupled with away form, we are backing Sydney to claim the three points on offer.

Goals have been the currency Adelaide United and Sydney FC have been dealing in this season. United have the most potent attacking unit with 16 strikes to their name. With 14 goals contributed by Sydney's attackers, they are in the same company. In addition, both defences have a penchant for allowing their rivals to get behind them, as evidenced by the 11 and 13 goals conceded by them respectively. Keeping this in mind, we are backing a high scoring affair at the Coopers Stadium.

Adelaide United vs Sydney: Check out the best odds and the latest stats

Adelaide United vs Sydney: Check out the team lineups

An away 1-2 win over Newcastle Jets would have pleased Carl Veart. The victory brought Adeliade United within touching distance of leaders Melbourne Victory. Given their form, they can claim A-League leadership and add some respite to their poor H2H record against Sydney FC. United's hopes will lie on Craig Goodwin, who is leading the scoring charts with five goals and an assist.

Sydney gave fans and neutrals much to talk about with their 3-2 win over Central Coast Mariners. The five-goal thriller showed their tenacity in the opposition's third. It also proved the critics right that Sky Blues' defence has a lot to catch up to. With pole position two points away, Steve Corica will surely not tinker much with their plans, except add some rigidity to their backline that continues to be run over by their rivals.

Questions About Adelaide United vs Sydney 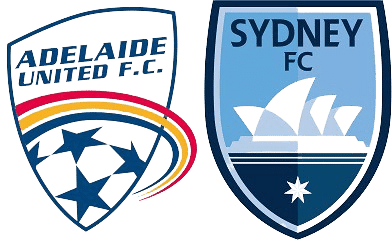 Which team is the favourite to win? Sydney.