Today, we will go over the Toronto vs SJ Earthquakes match to find the top betting picks and odds for their match. If you want to see more MLS odds and free picks, you should visit our website.

Below, we have listed the top Toronto vs SJ Earthquakes match picks and predictions for Sunday. Odds from BetMGM are subject to change. To be sure that there aren't any surprise odds changes, you should double-check the odds on your bet slip before placing these bets.

Injuries and Suspensions for Toronto vs SJ Earthquakes on Sunday

In this section, you can check out the latest lineup changes for both teams before their upcoming game.

Noble Okello is the only injured player from Toronto who has been gone since April with an undetermined injury.

Gilbert Fuentes and Siad Haji from SJ Earthquakes are out with injuries and won't make it this weekend. Besides them, Francisco Calvo is going to play for his national team and won't play, too.

Here are the most recent match histories and team statistics for the Toronto vs SJ Earthquakes fixture on Sunday.

Both Toronto and SJ Earthquakes are in the bottom part of their respective conferences and their form lacks plenty this season. We believe that out of the two teams involved Toronto has a better chance of winning and that we will see more than 2.5 total goals scored. 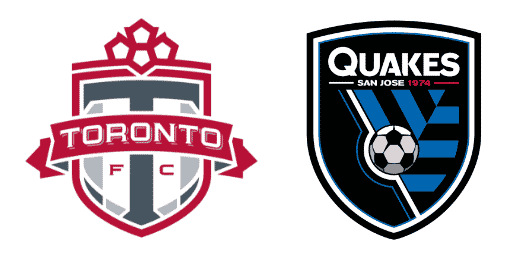