Let's go over the Inter Miami vs Toronto match this week and get the latest betting lines and predictions for the match. If you are looking for more MLS odds, then head to our website.

Below, you can see what our betting experts thought of the Inter Miami vs Toronto fixture this Thursday.

These odds are all from BetMGM, our recommended bookmaker, and are subject to change. Before wagering, make sure to double-check the prices on your bet slip.

Inter Miami hasn't had the best few weeks and they most likely won't make it to the playoffs, but at least they won three of the last five games they hosted. Toronto lost or drew all six of their last away matches. The cherry on top is that Inter Miami won two of the only three head-to-head fixtures that they played against Toronto in the past.

There have been many high-scoring games for Toronto FC recently. For example, three of the last five matches they played ended with over 2.5 total goals scored. Also, two of the last three times they faced Inter Miami, including once this year, the matches ended with more than 2.5 total goals. Both teams’ season average is more than 2.5 goals per match, including Inter Miami's average.

These are the head-to-head statistics and data for the Inter Miami vs Toronto match this week.

Both Inter Miami and Toronto have a bunch of injured players on their teams, but Toronto has more. They will be currently missing eight players because of injuries, while Inter Miami will miss only three. Christian Makoun from Inter Miami will also not play on Thursday because he is on international duty with his country's team.

The teams’ recent form might suggest that Inter Miami's chances of winning are slim to none, but when we look at the head-to-head history between the two teams and the fact that they are doing okay at home, we think differently. 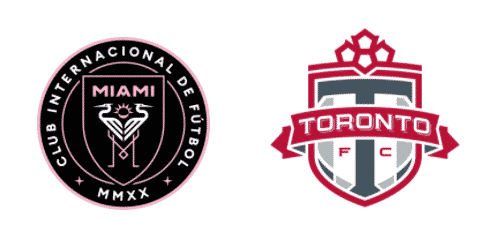