On Sunday, Austin and SJ Earthquakes will be playing against each other. If you want to see more MLS predictions, you can check out our website.

These are our experts’ takes on the upcoming Austin vs SJ Earthquakes match on Sunday. All odds are from BetMGM and are subject to change. This means that you should double-check them before betting.

Here, you can check out the latest lineups and suspensions for both teams before their upcoming game this weekend.

Hector Jimenez and Jhojan Manuel Valencia Jimenez are the only injured players from Austin right now, and the team doesn't have any other suspensions.

Gilbert Fuentes is the only injured player from SJ Earthquakes right now. The team doesn't have any other suspended payers, so he will be the only one missing for sure.

In the tables below, you can check out the stats and head-to-head data for the upcoming Austin vs SJ Earthquakes match.

Our favorites for this upcoming game are Austin, and we think that they will manage to beat SJ Earthquakes this time around. The last time they played, it was certain Astin would win until C. Cowell's goal in the 72nd minute. We also think that there will be more than 2.5 total goals scored during the match. 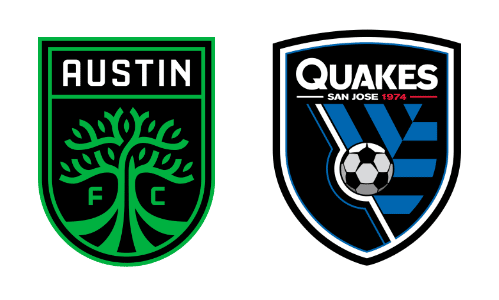