Here, we will go over the top predictions and free betting picks for the upcoming MLS fixture between Seattle Sounders and Inter Miami.

In the list below, you can check out the most recent betting lines and top predictions for the Seattle Sounders vs Inter Miami fixture. Odds from BetMGM are subject to change. Check them out before wagering on the platform.

We think that both teams will score during Sunday's game because many of the recent games they played ended that way. Actually, four of the last five matches for Inter Miami and the last six games for Seattle Sounders ended with a BTTS outcome.

Seattle Sounders have been in better form than their current opponents. There is a seven-point difference between the two teams even though they are in different conferences. Inter Miami managed to win only one game this season, while Seattle Sounders is leading them by one.

Here, you can read more about the current injuries and suspensions for both teams.

There are no injured or suspended players from Seattle Sounders, so they will be playing at full strength this weekend.

Inter Miami has a total of three injured players this weekend. Ian Fray got injured at the start of January, Kieran Gibbs got injured in mid-Mar, while Brek Shea got injured just last week.

In the tables below, you can see the most recent matches and scores for both teams, including the head-to-head data.

It's almost certain that both teams will score during their upcoming fixture. Most of the games for Inter Miami and Seattle Sounders ended with the same outcome. As for the end result, we believe that Seattle Sounders have a better chance of beating Inter Miami, although their form isn't one of the better ones in the MLS. 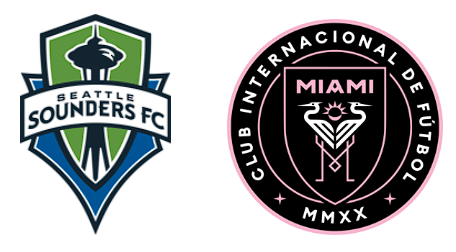