In this article, we will go over the upcoming MLS match between Philadelphia Union and SJ Earthquakes. If you want to check out our other MLS predictions and betting picks, you can head over to our website.

We tasked our experts with looking over the Philadelphia Union vs SJ Earthquakes fixture and coming up with the top free picks and predictions. Here is what they gave us. All odds are from the BetMGM platform and are correct when this was posted, but we can't guarantee that they won't change. The smartest move would be to double-check the odds via your bet slip before placing any bets.

The following players won't play this weekend due to injuries or suspensions for each team.

Philadelphia Union doesn't have any injured players, but Julian Carranza received a red card suspension for the match against Montreal they played.

There are two injured players since the end of February – Nathan and Jack Skahan, and Shea Salinas is out for even longer since last autumn. Midfielder Jamiro Monteiro won't play, as well, because of a red card suspension he got in the last match against Columbus Crew.

In the tables below, you can check out the Philadelphia Union vs SJ Earthquakes' latest statistics & data.

Philadelphia Union vs SJ Earthquakes: Summary of the Prediction

SJ Earthquakes aren't starting their season well this season without a win in the first two games. Philadelphia Union is trying and their score is one win and one draw, so far. Also, we think that both teams will most likely score during the match this weekend. 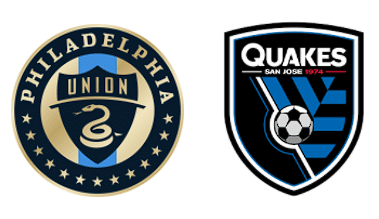