We will introduce you to the top free betting picks, best betting lines, and quality predictions regarding the Orlando City vs Houston Dynamo MLS fixture. If you want to see more MLS odds, check out the rest of them on our website.

Our betting experts had a task to find out which are the top betting picks for the Sunday match between Orlando City and Houston Dynamo, and we listed the results below. The betting lines are from the bookie BetMGM. Please remember to always double-check the odds before betting because they are subject to change.

Injuries and Lineups for Orlando City vs Houston Dynamo

In this section, you can check out the latest news regarding player injuries or suspensions.

Orlando City will only miss Carlos Antonio this weekend due to an injury he suffered at the start of April this year.

Houston Dynamo doesn't have any injured or suspended players at this time, so they will be playing at full strength this weekend.

In the tables below, you can check out the latest matches and scores for both Houston Dynamo and Orlando City, including their recent head-to-head history.

Right now, Orlando City is in a better position to win Sunday's match because they will be hosting it and they have the better recent form compared to Houston Dynamo. We think that Orlando City will win and there will be more than 2.5 total goals scored during the match. 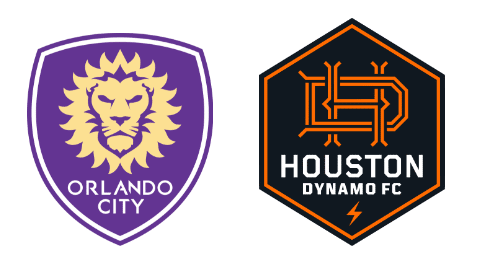