Let's check out another match at the end of the month – Houston Dynamo vs Colorado Rapids. You can see our recommendations and free picks for Sunday below.

These are our betting experts’ top recommendations for the upcoming Houston Dynamo vs Colorado Rapids fixture. For more MLS predictions, make sure to check out our website.

These odds are all from BetMGM and are subject to change, so make sure to double-check them before continuing.

Many of the times the Rapids and Houston Dynamo met, the games ended with both teams scoring – exactly 70% of the head-to-head games. Also, three of the last five matches for both teams ended the same way.

Colorado Rapids is one of the highest placed teams in the Western Conference table with fifty-five points, while Houston Dynamo is among the lowest ranks with only thirty points. That isn't the only reason we believe that the Rapids will win though, they also won three of the last four head-to-head matches against Houston Dynamo, while the fourth game ended in a draw.

Below, you can check out the most recent statistics and match histories for both teams.

Colorado Rapids had a few average games recently with very colorful outcomes. They technically have a chance to climb to a first-place position in the Western Conference, but then they need to improve their form considerably. They can start by winning on Sunday, which won't be that hard for them. They don't have any injured or suspended players for this weekend, so that is their first advantage.

Houston Dynamo has a total of four injured players that won't be able to make it on Sunday. Forwards Mateo Bajamich, Corey Baird, and midfielder Derrick Jones are with abdominal strains, and Nico Lemoine has been out the longest with a groin injury he suffered in June. These missing players plus the fact that their form is worse than Colorado Rapids’, is why we believe they won't win on Sunday. 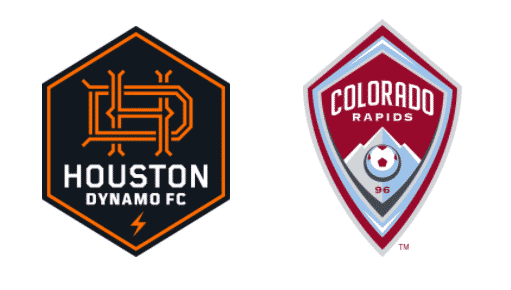