A new season in MLS is ahead of us and both clubs will be looking to start in the best possible way!

The clubs aren’t strangers. They know each other quite well. And as a result, we know them well. Our soccer experts compiled the following predictions. Use BetMGM for double-checking the upper-mentioned odds as they are subject to change.

In the last 10 games between Dallas and Toronto, we saw 6 victories for Dallas, 2 for Toronto, and 2 draws. Toronto has won only 1 away game and that was almost 11 years ago. With coach Bob Bradley in charge, the Toronto squad is expected to look a bit better than last season but this Dallas side is just too good to ignore. Toronto finished 13th in the Eastern Conference in the MLS last season while Dallas finished 11th.

The season is opening, each team wants good performance and a great start. The teams are expected to play an open and attractive game and that suggests 3 or more goals. Such was the case on 6 occasions in the last 10 games. With the new attacking arrivals in both teams, the chances for goals just keep getting higher and higher.

Squad insight for the Dallas vs Toronto clash

The few injury issues in the squads will not ruin the opening of the season in MLS.

The new arrival Beni Redzic is the only unavailable player for this game but we expect the star of the team Alan Velasco to perform well in that position. Further hopes for good display we give to Franco Jara who did a very good pre-season. The same could be said about the goalkeeper who had a lot of clean sheets in the pre-season friendlies.

The troubles for Bob Bradley come in attack as Ayo Akinola is injured and it is still uncertain who will lead the attack. Toronto had a good pre-season and achieved a few victories but the troubles in defense seem to remain as the club did not have any clean sheets. The injury of Ralph Priso-Mbongue will not make things easier for Alex Bono and we expect he will allow a goal in this game as well.

Head-to-head data on the Dallas vs Toronto game

Those are the key head-to-head statistics and odds for the Dallas vs Toronto game:

The fans will be pleased

With the season-opening, we don’t expect that the teams will hide in defense. We expect an open game and more of the same from the pre-season friendlies that the two teams had. Both clubs performed well and achieved a lot of victories. It’s time they put these efforts to good use in the MLS. 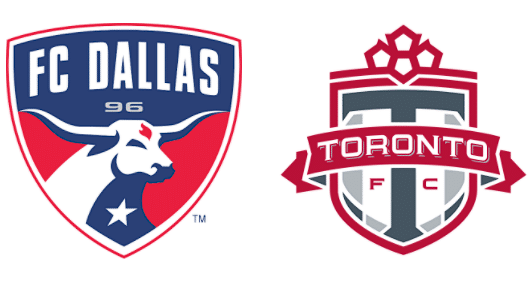