Pachuca has a great chance to get to the top of the table on Sunday. Let’s hope they won’t blow it!

Odds & Picks for Toluca vs Pachuca

No one denies that Toluca has been performing well in the Clausura but Pachuca has been exceptional and a victory will earn them the 1st position in Liga MX. Check BetMGM for the most attractive betting lines. Make sure to double-check the above-mentioned odds as they are subject to change!

Pachuca is currently second in Liga MX but has a game yet to be played. A victory will mean first place for Guillermo Almada and his boys. The head-to-heads aren’t in favor of Pachuca as the team has only two victories, three games ended in a draw, and Toluca won on five occasions. Toluca has allowed fourteen goals in eight games while Pachuca has the best attack in the league. We believe the current momentum will triumph over the traditions in this case.

Seven of the last ten games between the two clubs ended with three or more goals being scored. Pachuca scored seventeen goals in eight games in the Clausura while Toluca has one of the weakest defenses in the league right now despite the 6th position in the league. The last home game for Toluca had three goals and four of the last five league games for Pachuca had three or more goals.

There are no injuries or suspensions for either side this Sunday.

Camilo Sanvezzo was the hero for Toluca in the last game as he scored the only goal. Alexis Canelo is the top goal-scorer for Toluca this season and has five goals so far. Haret Ortega is one of Liga MX’s most aggressive players as he has two red cards so far this season. We expect him to be in the eye of the storm again.

Aviles Hurtado has nine yellow cards this season and should pay more attention in the game against Toluca as another yellow card could mean suspension. Nicolas Ibanez is the top goal-scorer for the team as he has eight goals from sixty-five shots this season. Victor Guzman is the other key player with five goals this season.

Toluca vs Pachuca and the best odds & H2H for this season

Coach Guillermo Ochoa isn’t going to be satisfied with anything else than the three points against Toluca. The experienced coach has never lost a game against this opponent – two victories and two draws. Our soccer experts believe we will see a deja vu this Sunday and a 0:2 away victory for Pachuca. 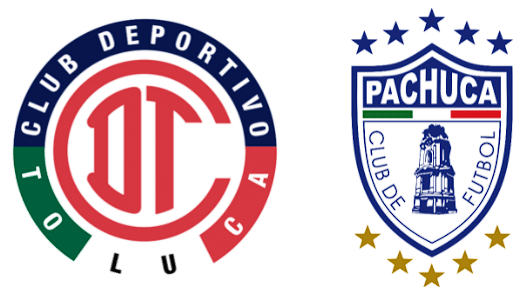