One of the more exciting clashes in Liga MX is ahead of us with Tijuana and Pumas UNAM battling it out for the 3 points!

An interesting clash for sure, but one that we analyzed well enough to support you with the best bets and odds. For more expert Liga MX picks, please visit our dedicated page.The mentioned odds were such when the article was being written. Our recommended bookmaker for the game is BetMGM.

In the last 10 games between these two clubs, we are seeing a complete stalemate – 4 victories for Tijuana, 2 draws, and 4 victories for Pumas UNAM. The two clubs aren’t that far from one another in Liga MX as well and only 2 points separate the two in the league. The last draw between them was the last game that Tijuana hosted last year.

In the last 10 games, we saw 7 resulting in only one team doing all the scoring. Pumas UNAM’s last 5 games resulted in 3 with only 1 team scoring goals. Club Tijuana hasn’t been very productive in front of goal as well and it’s very likely for that trend to continue.

There are some interesting facts concerning the lineups for this game. Let’s see what the coaches have to deal with!

There are no injury or suspension issues for Tijuana. The attack is doing poorly and we don’t think Mauro Manotas, Lucas Rodriguez, and Renato Ibarra have what it takes to make the difference in attack. Furthermore, Jonathan Orozco allowed a lot of goals recently and we don’t think he will have a good day here as well.

Washington Corozo will miss the game due to an abductor injury which will be a big blow for the away side. Should the defense have a solid game we expect Alfredo Talavera to lock the goal and have a clean sheet here as well.

Find the best odds for the Tijuana vs Pumas UNAM game

Those are the key head-to-head statistics and odds for the Tijuana vs Puma UNAM game:

Club Tijuana has been doing the same in the Clausura part of the season as in the Apertura – poorly! The only thing going for the team is the somewhat good performances against Pumas UNAM and the injury issue for Pumas. The game will be played in front of the home crowd and chances are a draw is going to be considered a success for Tijuana here. 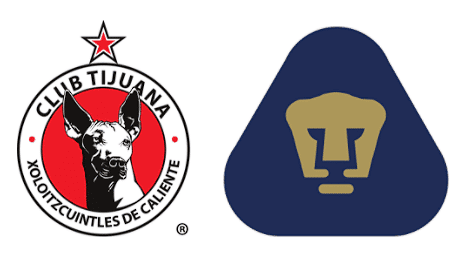 FAQ on the Tijuana vs Pumas UNAM game: