A what is expected to be a real thriller at the bottom of the table on the 7th of November does provide some great betting picks.

Tijuana vs Pachuca: Top Predictions and Betting Lines for Sunday

Remember to always double-check your odds before placing the bet as they are subject to change! Our recommended bookmaker for the game is BetMGM.

It is very hard to make a case for the currently ranked last in the league Tijuana. Pachuca is 3 spots above them at the 15th position and is also not enjoying their best moments but they are indeed better. The last 10 games between the two clubs were a decisive factor for this prediction as Pachuca claimed a total of 7 victories while Tijuana has only 3. Furthermore, both clubs will enjoy their best 11 men, and if those are the best 11 men that Tijuana can gather then they are in for more trouble in this game.

Historically speaking, this could go either way as 5 of the last 10 games ended in one of the teams failing to score a goal. What we preferred to favor here is the current display of both teams which doesn’t speak well for their goalscoring prowess. Club Tijuana is one of the weakest teams in the league in that regard with only 13 goals scored in 15 games.

Again, Tijuana may have a bad attack but they also have the absolute worst defense that allowed a total of 25 goals in 15 games. The defense can be compared to Swiss cheese this season as it is literally filled with holes that Paulo Pezzolano is struggling to find a solution for. Pachuca’s offense isn’t doing all that bad and they could really take advantage of this fact. Their last 5 games ended in 2 being over 2.5 and 3 being exactly 2 goals – very close to calling.

Head-to-head data for the Tijuana vs Pachuca game

Those are the key head-to-head statistics and odds for Tijuana vs Pachuca match:

Battle at the bottom of the table

Two of the worst-performing teams in Liga MX will battle it out for extremely valuable 3 points this Sunday at 04:00 on Caliente Stadium. Despite Tijuana’s most recent success against Atlas, we don’t see them as a favorite in this game. We prefer Pachuca as they are better performers in the league, they have better stats in the head-to-head games and they have the better momentum of the two. Either a 0:2 or 1:3 victory would be no surprise to people. 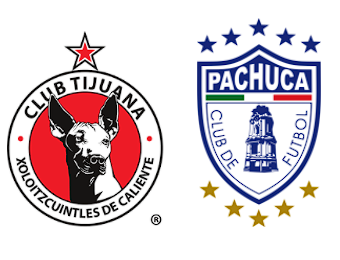 Common questions for the Tijuana vs Pachuca game: