This article will help you navigate all the betting options for the Austin vs Vancouver Whitecaps match and pick the best ones. If you want to see more MLS predictions, you can take a look at our latest posts.

Top Free Picks and Predictions for Austin vs Vancouver Whitecaps

These betting picks are our top choices for the upcoming fixture between Austin and Vancouver Whitecaps. Odds are from BetMGM and are subject to change, so make sure to double-check them before you place any wagers.

Here, you can check out the latest injury information and lineups for the upcoming weekend game.

Austin is doing well in terms of injuries and suspensions because they don't have any suspended players, while only Jhohan Romana is injured since February.

Vancouver Whitecaps only has one injury this week – Caio Alexandre who got injured last summer. Similar to Austin, the Whitecaps don't have any suspended players right now.

In these tables, you can check out the latest head-to-head stats for both Vancouver Whitecaps and Austin.

Our Final Conclusion Regarding the Sunday Fixture

Despite Austin's negative past with Vancouver Whitecaps, this is a new season, and now they have a better form, which means they might just score their first win against the Whitecaps in history. We also think there is a chance more than 2.5 total goals would be scored during the match because of the latest games for both teams. 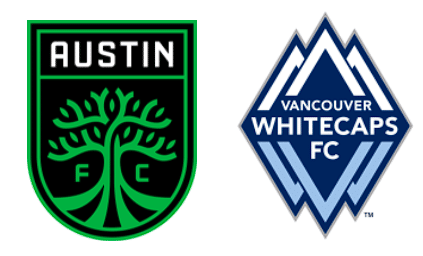 Prevalent Questions & Answers Regarding the Match