SJ Earthquakes will face Dallas in an attempt to climb the rankings they will face each other on Sunday. Continue reading to find the best betting lines and odds for the match. If you want to see more MLS predictions, check out our website.

Below, you can check out our list of the top free betting picks and predictions for the upcoming MLS game between SJ Earthquakes and Dallas. These odds are from BetMGM and are subject to change. Make sure you double-check them before wagering via your bet slip.

We believe that the next game between SJ Earthquakes and Dallas will most likely end with more than 2.5 total goals scored. That's because three of the last five head-to-head games between them ended that way. Also, three of the last five fixtures for both SJ Earthquakes and Dallas ended with more than 2.5 total goals.

Suspensions and Lineups for SJ Earthquakes vs Dallas

Here, you can check out the latest lineups and injuries for both teams before their upcoming game on Sunday.

SJ Earthquakes has a total of four sidelined players right now, and all of them are out with various injuries – Ousseni Bouda, Gilbert Fuentes, William Richmond, and Carlos Akapo.

Dallas doesn't have any suspended players but Matt Hedges is out with an injury since the end of August.

These are the head-to-head stats and latest bookmaker odds for the SJ Earthquakes vs Dallas match next weekend.

Dallas is definitely our favorite team for the upcoming game against SJ Earthquakes. Even looking at the point difference alone will convince you of that. We also believe that there will be more than 2.5 total goals scored during Sunday's game. 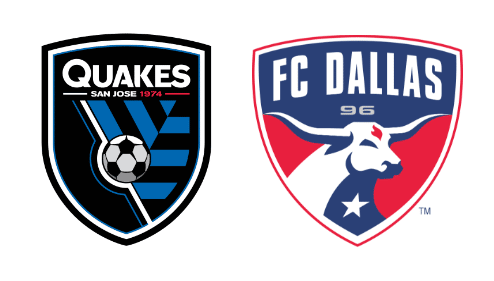 Prevalent Q&As for the SJ Earthquakes vs Dallas Fixture