Today, we will check out the SJ Earthquakes vs Colorado Rapids match, and predict the top free picks for the event. If you want to see more MLS betting picks, you can check out our website.

Let's check out the betting picks and predictions for the upcoming MLS match between SJ Earthquakes and Colorado Rapids. The odds we used here are from our recommended bookmaker BetMGM, so make sure to check them out on their website, mobile app, or your bet slip.

Colorado Rapids have a head-to-head advantage against SJ Earthquakes because they haven't lost a match against them since 2019. They also have a six-point advantage in the Western Conference table over SJ Earthquakes.

In this section, you can check out the latest injuries and lineups for Sunday's match.

There are three injured players from SJ Earthquakes right now and all of them are out since March or April with various injuries. There aren't any suspended players from the team right now.

Colorado Rapids has only two injured players right now – Braian Alejandro Galvan and Oliver Larraz. Although forward Diego Rubio got a red card suspension in the last game against the Timbers.

H2H Data & Recent Match Histories for the Match on Thursday

In the table below, we have gathered the most recent head-to-head data between the two clubs and made sure to include top odds from famous bookies. 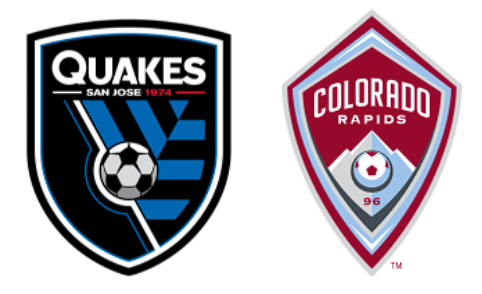