SJ Earthquakes will face Seattle Sounders on Sunday (24th of April), and we will go over the stats to present the best predictions and betting picks for you.

We asked our betting experts to find the best betting picks for the SJ Earthquakes vs Seattle Sounders match, and this is what they came up with. All odds are subject to change and are from BetMGM our recommended bookmaker for this match.

We think that there is a very high chance both teams will score goals during their weekend match-up because the last time they faced each other, the same thing happened, no matter the winner or number of goals. Also, four of the last five matches for the Sounders and three of the last five games for SJ Earthquakes ended the same way.

Check out the latest injuries and suspensions for Sunday's game here.

SJ Earthquakes have four injured players right now, but no suspensions. Gilbert Fuentes and Judson are out since this month, while Benjamin Kikanovic and Javier Eduardo Lopez were injured in March.

Currently, Seattle Sounders don't have any injured or suspended players on their squad, so they will be playing at 100%.

These are the most recent head-to-head stats for the match this weekend.

The last time these two teams faced each other back in September last year, it ended with a win for Seattle Sounders and both teams scored goals. Our experts believe that this time around, the game will also end similarly because of various reasons, including the teams’ recent history in the MLS and against each other. 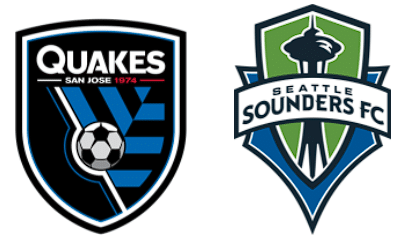