In this article, we will give you all the information you would want to know about the upcoming SJ Earthquakes vs Portland Timbers fixture on Thursday.

These are the top SJ Earthquakes vs Portland Timbers predictions and free betting tips for their upcoming fixture next week. All the odds in this article are from BetMGM and are subject to change. Check your bet slip before continuing with the betting.

SJ Earthquakes are currently in a better recent form with only one loss out of the last five matches they played. Portland Timbers, on the other hand, won only one match out of their last five games. We think that Thursday's game will most likely end with a win for the Earthquakes even though they are five points behind the Timbers right now.

In this section, you can check out the most recent injuries and suspensions for both teams.

SJ Earthquakes don't have any suspensions on the tam, but five of their players are injured – George Asomani, Gilbert Fuentes, Judson, Javier Eduardo Lopez, and Shea Salinas (all midfielders).

Portland Timbers don't have any suspended players but two of their own are injured. Felipe Mora and George Fochive are both out with different injuries for more than a month now.

You can check out the most recent match statistics for the upcoming SJ Earthquakes vs Portland Timbers match in these tables. 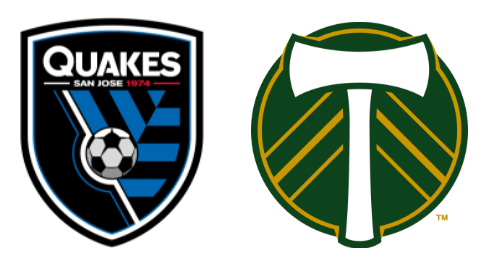