In this article, we will go over the most recent betting lines, odds, and predictions regarding the upcoming match between Columbus Crew and Philadelphia Union on Monday. You can find more MLS odds and predictions on our website.

These are our top three choices for the match between Columbus Crew and Philadelphia Union. Considering that betting lines are subject to change, make sure you double-check them on your bet slip or bookmaker page before placing these bets.

We don't think that both teams will score during Monday's match because many of the recent games involving these teams ended that way. For example, four of the last five head-to-head games between these teams and a couple of the games each team played separately.

Injuries and Suspensions for Columbus Crew vs Philadelphia Union

In this section, you can check out the most recent injuries and suspensions for the upcoming MLS game this weekend.

Columbus Crew doesn't have any injured or suspended players at this time, so they will be playing at full strength next week against Philadelphia Union.

Philadelphia Union doesn't have any suspended players but Jesus Bueno is out with an injury since mid-June and won't play on Monday.

These are Columbus Crew and Philadelphia Union's recent matches, including the scores. Also, you can see the top bookmaker odds listed in the tables below.

The Columbus Crew vs Philadelphia Union fixture is going to be interesting because both teams have the same recent form – two wins, two draws, and one loss. Our top betting picks for the game are that we are going to see fewer than 2.5 total goals scored and only one or none of the teams scoring goal/goals. 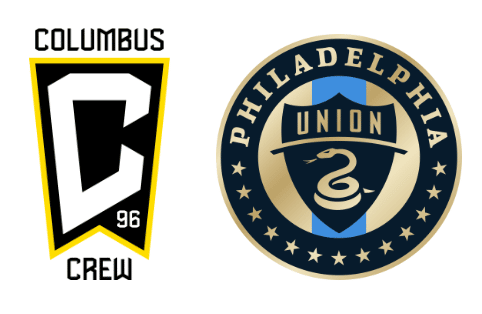 Prevalent Questions & Answers Regarding the Fixture