This article is about the upcoming MLS game between Cincinnati and Orlando City.  It will be on the 25th of June, and you can find the latest betting lines below. If you want to see more MLS odds, then make sure to check out our site.

We will list the top three betting picks for the Cincinnati vs Orlando City fixture below. These odds are from the BetMGM bookmaker and are subject to change, so make sure you check them out on your bet slip before you click on the final button.

The last five games for both Cincinnati and Orlando City ended with both teams scoring goals. We believe that there is a high chance both teams will score on Saturday, too. Also, two of the last three head-to-head fixtures between Orlando City and Cincinnati ended the same way.

Currently, both teams are in the same recent form with two wins, two draws, and one loss in the last five matches they played. Orlando City, however, has the advantage because they have beaten Cincinnati in three of the last five head-to-head matches they played. Also, Orlando City is five points ahead of Cincinnati in the Eastern Conference table.

Latest Team Injuries and Suspensions Before the Game

Here, you can check out the latest lineups and injuries for both teams before the upcoming game.

Currently, Cincinnati has a total of three injured players. They are Yuya Kubo, Ronald Matarrita, and Junior Moreno. They don't have any suspended players at the moment.

Orlando City has three injuries at this moment – Mason Stajduhar and Silvester van der Water have been out since May, while Carlos Antonio got injured in April.

Below, you can see all the latest matches and scores for both the Cincinnati and Orlando City teams, which will help you place the bet.

We believe that Orlando City has a better chance to win Saturday's game because they have had an advantage against Cincinnati and they played better in the season compared to the home team. We also think that there will be more than 2.5 total goals scored during the game. 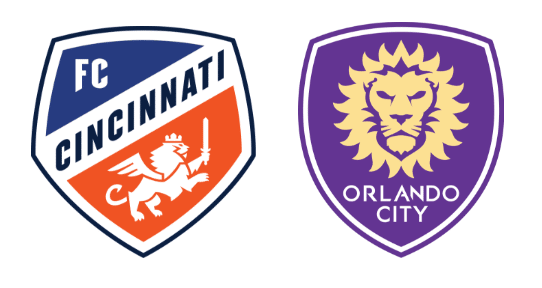