In this article, you can read about the upcoming match between Charlotte and Orlando City to find the best betting picks, predictions, and odds for Monday. If you are interested in seeing more MLS predictions, you should take a look at our website's latest articles.

Here is what our betting experts think of the upcoming Charlotte vs Orlando City fixture. These odds are all from BetMGM and are correct at the time of writing. Make sure to double-check your bet slip because the odds may change at any time.

Currently, Orlando City remains the only one that has won in a head-to-head game. Charlotte has never beaten Orlando City before and their recent form is lacking with three losses in the last five games they played. Orlando City's recent form remains the same as Charlotte's but the main difference is they have won against them in the recent past.

Injuries and Lineups for Charlotte vs Orlando City on Monday

In this section, you can check out the latest injuries and lineups for Monday's game between these teams.

Adam Armour and Mello Vinicius remain the only injured players on Charlotte's squad right now, and the team doesn't have any suspended players.

Orlando City has only two injured players right now – Joseph DeZart and Ercan Kara, but none of their own are suspended.

These are the latest bookmaker prices and match histories for the Charlotte vs Orlando City fixture this week.

In our opinion, history will repeat itself because we think that Orlando City will beat Charlotte for a second time on Monday. Also, we believe there will be more than 2.5 total goals scored during the game. Their first time together and their separate scores show that these are the most likely outcomes. 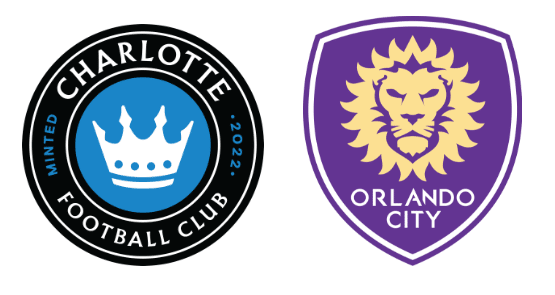 Popular Q&As for Charlotte vs Orlando City This Week