If you are looking for the top betting lines and predictions for the New York City vs Atlanta United playoff match, then you came to the right place. Continue reading to find all the info about the event.

Here are our top free betting picks and betting lines for the upcoming New York City vs Atlanta United fixture.

These odds are all from BetMGM and are subject to change. Check your bet slip before continuing.

New York City managed to beat Atlanta United in two of the last three games they played since 2019. Those two fixtures were both hosted by New York City, like the upcoming match this weekend. In terms of recent form, NYC has three wins and two draws out of the last five matches, while Atlanta United has three draws and two wins. Let’s not forget that New York City has forward Valentin Castellanos who is the top scorer this season with nineteen goals and eight assists.

Below, you can take a look at the most recent bookie odds and statistics for the upcoming New York City vs Atlanta United match.

The winner of this match will face the table leader from the season New England Revolution. Both teams have several injured players, including Hyndman, Sosa, Tajouri, and Tinnerholm. None of them will be back in time for Sunday's match, so we can count them out. There aren't any suspensions active either. As for the outcome, we are expecting New York City to win the match like they have many times when hosting a game against Atlanta United in the past. 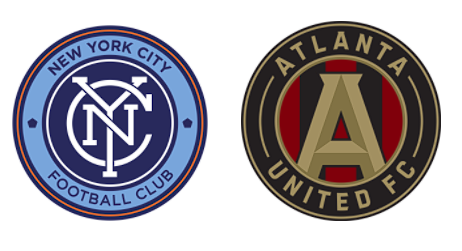