This article is dedicated to the MLS fixture between New England and Orlando City. If you want to check out the top MLS odds, you are welcome to visit the rest of our site.

We reviewed the fixture and decided that the three betting picks below are the most popular and best for anyone. All betting lines are from the bookmaker BetMGM and if you want to be certain about them, always double-check your bet slip.

Lineup Information and Injuries for New England vs Orlando City

In this section, you can check out the latest New England vs Orlando City injured or suspended players before their match this week.

New England's only injured player at this time is Henry Kessler who got injured a month ago, but Adam Buksa and Matt Turner will also miss the game due to national selection duties.

Orlando City's only injured player is Carlos Antonio who is out since the beginning of April with an unknown injury. They don't have any suspended players.

Below, you can see all the latest scores and match histories of both New England and Orlando City. We will also add the latest odds by popular bookmakers.

Our final predictions for Thursday's game include over 2.5 total goals scored from both of the teams in the game. The past statistics of each team and the head-to-head data suggest that these two outcomes are very probable, so we will see. 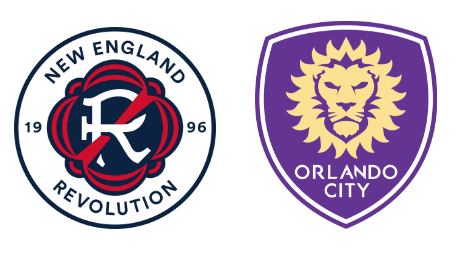