Today, we will go over the Nashville vs Philadelphia Union match, and recommend you the best betting lines, odds, and picks for the event. If you want to see more MLS odds, you can check out our website for the latest ones.

After going over the fixture and the team news, we listed the top free betting picks for the event here. All BetMGM odds are correct at the time of posting, but make sure you check your bet slip before confirming because they are subject to change.

Five of the eight matches this season for Nashville and six of the total eight games for Philadelphia Union this season all ended with fewer than 2.5 total goals scored. We think that there is a possibility that Sunday's game also ends the same way. Also, three of the four head-to-head fixtures between them also ended the same way. Actually, if we aren't counting penalties all four matches between them were low-scoring outcomes.

Here, you can check out which players won't be able to make it this weekend because of injuries or suspensions.

Nashville has two injuries on the squad right now – Irakoze Donasiyano who got injured in mid-April and Teal Bunbury who was injured in March.

There aren't any injured or suspended players from Philadelphia Union right now, so they will be facing their opponents at 100% this weekend.

In these tables, we put the most recent and relevant data for the upcoming MLS fixture between Nashville and Philadelphia Union.

Nashville might be hosting the match, but Philadelphia Union has the advantage whichever way we look at this match-up. The Union has better recent form and they even beat Nashville in most of the head-to-head fixtures they faced them at. We also think there won't be that many goals scored based on the previous games for both teams this season and their history. 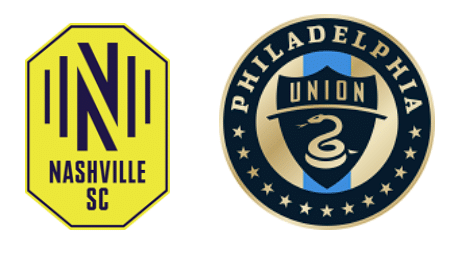 Common Questions Regarding the Sunday Fixture