The next MLS game we will check out is Minnesota United vs LA Galaxy, which is scheduled to be played on the 19th of May. Continue reading to find the top betting tips and odds.

The list below contains our betting experts’ top free betting picks for Minnesota United vs LA Galaxy MLS game on Thursday. These odds are all from BetMGM and are correct at the time of writing. Before wagering, make sure to double-check them.

Right now, LA Galaxy is in a better recent form than Minnesota United, and we think that they will most likely win Thursday's match considering that there is a five-point advantage between the two teams. LA Galaxy won or drew four of the last five games they played away from home, while Minnesota United lost three of the last five games they played in the MLS.

Lineup Information Regarding the Upcoming Match

Here, you can check out the most recent lineup info about the upcoming game this week.

In mid-April two of Minnesota United's players got injured and are still sidelined – Romain Metanire and Patrick Weah. No others are injured or suspended right now.

LA Galaxy doesn't have any active suspensions, but two of their own are injured – Adam Saldana and Jorge Villafana who are both out since February.

Below, you can check out the statistics and recent odds we gathered for Minnesota United vs LA Galaxy fixture this week.

Match Preview & Our Opinion for the Final Outcome

LA Galaxy is in the lead right now, and we think they will have no problem winning the match. We have seen LA Galaxy win against Minnesota United as guests in three of the last five matches they played. We also believe that there will be more than 2.5 total goals scored during the match. 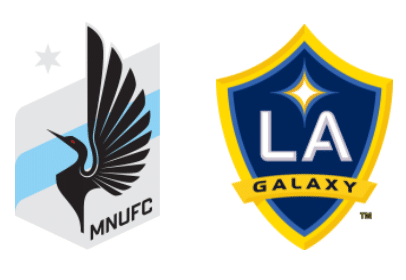