This preview looks ahead to a resurgent Los Angeles outfit taking on a New York City outfit, who are quite strong in away games, at the Banc of California Stadium this weekend.

Los Angeles FC welcomed home fans and Carlos Vela to a positive 2-1 win over Colorado Rapids in the last game. New York City ended up conceding two late goals to lose 2-1 against Columbus Crew. The best predictions for this match are:

The return of home fans and Carlos Vela turned out to be a huge inspiration for Los Angeles, who are once again likely to benefit from the similar scenario. New York City will be down on confidence after losing their unbeaten streak to Columbus Crew. The manner of the loss will especially hurt Ronny Deila’s men. The only two meetings between Los Angeles and New York City have been stalemates but the hosts will be able to get a slight edge.

On both occasions when Los Angeles and New York City have faced each other, the games have produced a lot of goals. LAFC will be on a buoyant mood after a strong performance against Columbus Crew. Despite their away form not being the greatest, New York City have managed to find a way past their opponents in each of their away matches.

Diego Rossi came up with a brace in the win over Colorado Rapids. He has now scored three goals so far this season. Even though the headline was on the return of Carlos Vela, Rossi was provided with good opportunities by his teammates, who are once again likely to focus on the 23-year-old.

A string of four consecutive matches without a win finally came to an end for Los Angeles. Manager Bob Bradley sees his team just outside the play-off places. Apart from the loss against Seattle, Los Angeles have now been able to score in all of their MLS 2021 matches so far.

New York City appeared to be heading for a fifth consecutive game without a defeat before being surprised by Columbus Crew. The team are still very strong on the set pieces, but defending a lead will be the area where the team can make sizeable improvements. Araújo dos Santos, Gedion Zelalem, Thiago Andrade, and Maxi Moralez are injured for the team while Anton Tinnerholm is doubtful. 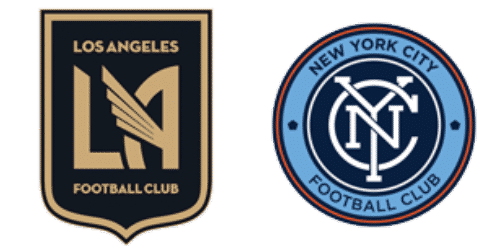 Where is the match going to take place? Banc of California Stadium

Who is the favorite team to win the game? Los Angeles FC