Let's check out and see the best free tips and odds for the upcoming match between LA Galaxy and New York City. If you are interested in more MLS predictions and odds, you can check out our website.

Let's see what exactly our betting experts thought of regarding the LA Galaxy vs New York City fixture this weekend. Keep in mind that all odds are correct at this time, but they are also subject to change. Before wagering makes sure to double-check your bet slip.

Four of the last five matches that LA Galaxy and New York City played regardless of the format and tournament ended with over 2.5 total goals. We think that it's likely that the match on Sunday will also end that way. The two teams haven't played together many times, but two of the five games they played also ended that way.

Information and Lineups Regarding LA Galaxy vs New York City

What is the injury status of both teams? Let's find out below.

We don't have information for any injured or suspended players from LA Galaxy.

The only injury on the team is Anton Tinnerholm's Achilles tendon injury from last October. No players are suspended.

Match Data, Statistics, and Histories for the Sunday Game

Let's check out the most recent stats and match data for the LA Galaxy vs New York City game.

LA Galaxy vs New York City: How Will LA Galaxy Start the Season?

LA Galaxy hasn't had the best luck against New York City in the past and they have only managed to beat them once in history in 2015. Since then, the four times they played together each year until 2019 the matches ended with wins for New York City. There is also a big chance the match will end with more than 2.5 total goals scored based on the recent games both teams played. 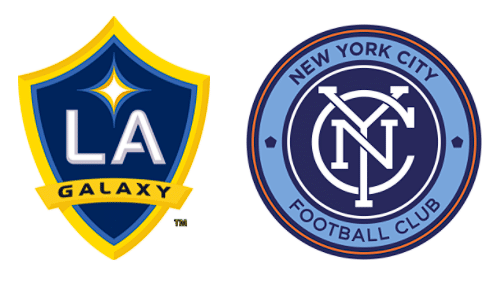 Prevalent Questions and Answers Regarding the Match