Today, the next fixture on our list is Inter Miami vs Houston Dynamo, which will be played on the 3rd of April. If you want to find more MLS betting picks and predictions for the next matches in the tournament, check out our website.

Below, we listed the top three betting picks for the upcoming Inter Miami vs Houston Dynamo fixture. All betting lines used in this article are from the BetMGM bookmaker platform, which we recommend. Also, before wagering make sure that the odds haven't changed because it's possible.

Houston Dynamo's form is not the best recently, but compared to their opponent's recent form, we think that Houston Dynamo has a chance to beat Inter Miami for the first time in history. The away team only lost one form, while Inter Miami has the worst form in their conference.

We don’t think that Sunday's match will end with a lot of goals scored because the only time these two teams played together, the match ended with only one goal. Also, three of the last four games for Houston Dynamo and half of Inter Miami's matches so far ended with fewer than 2.5 total goals.

Injuries and Latest Suspensions for the Sunday Game

Here, you can check out the latest suspensions and injuries for both teams.

Victor Ulloa and Joevin Jones have been injured since last year, but they aren't the only injuries on Inter Miami's squad. Ian Fray suffered a knee injury at the end of January and also won’t play on the weekend.

The only injured player from Houston Dynamo is Nico Lemoine who has been out since last year.

In the tables below, you can check out the latest bookie odds and match histories for the Inter Miami and Houston Dynamo MLS fixture on Sunday.

Both teams’ form is quite bad, but Inter Miami is at the bottom of their conference. Although the teams only played together once and the away team lost, we think that Houston Dynamo will win this time. There is also a big chance we won’t see that many goals scored. 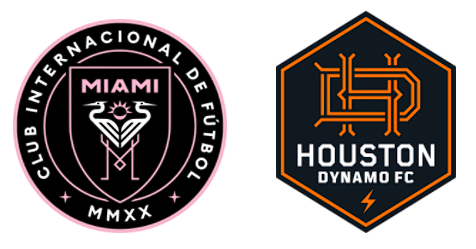