Let's check out the Dallas vs Houston Dynamo top free betting picks, predictions, and latest betting lines. If you want to see more MLS odds, you should check out our website's latest articles.

Below, you can check out the top free picks for the upcoming Dallas vs Houston Dynamo fixture on Saturday. Odds from BetMGM are subject to change, so make sure to double-check them on your bet slip before confirming.

Both Dallas and Houston Dynamo are currently with twelve points in the Western Conference table and only one loss each this season. We think that Dallas has a better chance of winning, though because they haven't lost a home game against Houston Dynamo since 2011. Also, their latest head-to-head in February ended in Dallas’ favor.

Latest Lineups and Information About Dallas vs Houston Dynamo

Check out the latest Dallas vs Houston Dynamo lineups and injuries for the weekend game.

Dallas doesn't have any injured or suspended players on their squad, so they will be facing their opponents at 100%.

Houston Dynamo doesn't have any suspended players and only Nico Lemoine has been out for almost a year with a groin injury.

These are the latest betting odds and statistics for the Dallas vs Houston Dynamo fixture this weekend.

Our Opinion About the Saturday Match Outcome

The Saturday game is going to be very interesting because both teams have mostly won or drawn their games, so far. Dallas though has the advantage because they will host the game and they haven't lost a home game to Houston Dynamo in particular in ten years and more. We also think that there will be more than 2.5 total goals scored during the game this weekend. 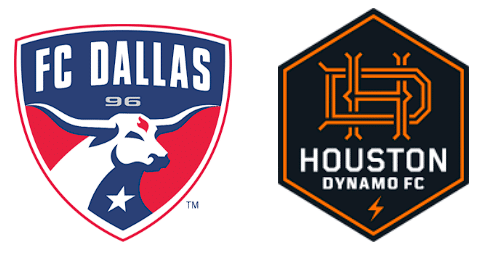