The opening part of the season in any league is always a special event and DC United will have the honor of hosting Charlotte’s very first league game.

Charlotte is the newly promoted team to MLS for this season. The team was created back in December 2019 and the first official MLS game was set for this Sunday. Here is how we believe things will go down. Check BetMGM for the most attractive and current betting lines. Make sure to double-check the above-mentioned odds!

DC United to win both parts of the game

This is Charlotte’s first MLS game ever and all the pressure and fear of the unknown will be over in their court. DC United is a veteran MLS team with a lot of history in the league. The 4 titles of the league in 1996, 1997, 1999, and 2004 indicate that the team is the big favorite to win against the rookie Charlotte.

As a rookie in MLS, we don’t expect Charlotte to have a very good first few games in the league. It takes time for a team to gel and adapt and we believe this is DC United’s best chance for the 3 points and a clean sheet this season.

Only minor injury issues for the two teams. Nothing for the fans to worry about.

No injury or suspension issue for DC United at the beginning of the season in MLS. Ola Kamara is expected to be the key man in the attack for the home team. He scored twice for the 1:3 away victory against Toronto in one of last season’s games.

Pablo Sisniega is injured and will miss this game and it will be up to Kristijan Kahlina to establish himself as the starting goalkeeper. Meanwhile, the second most expensive midfielder for Charlotte Sergio Ruiz will also miss this game. Charlotte lost heavily against Nashville in the pre-season friendlies and we expect the goalkeeper to have a poor game against DC United.

Odds and Stats for the DC United vs Charlotte game

This will be Charlotte’s official introduction to US soccer. When you look at how their only pre-season friendly went down (3:1 victory for Nashville) you can’t make much of a case for Charlotte. We are happy to have the team in MLS and we predict a bright future for the project but a victory or even a draw against an experienced enemy such as DC United is out of the question for this game. 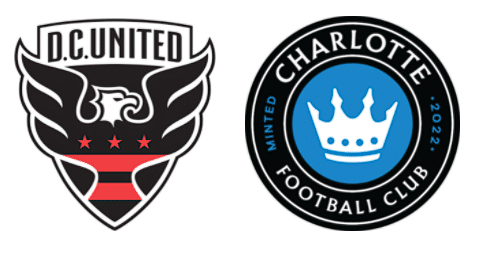 FAQ on DC United vs Charlotte: