Dallas will face Seattle Sounders on Sunday, and we will go over the match to find the top betting picks and predictions. If you want to check out more MLS odds and picks, make sure to visit our website for more articles.

Below, we have listed the most popular and best predictions, betting lines, and free picks for the upcoming MLS fixture between Dallas and Seattle Sounders. Odds from BetMGM are subject to change but correct at the time of writing. Before you place a wager, make sure to double-check it via your bet slip.

Dallas has a better form right now compared to Seattle Sounders. We think that Sunday's game will most likely end with a win for Dallas. Also, the home team hasn't lost a game at home since October 2021. Seattle Sounders isn't in such a good form and they won't have the home-field advantage. Dallas also won three of the last five matches they played at home against Seattle Sounders.

Lineups and Information About the Dallas vs Seattle Sounders Game

Here, you can read about the latest injuries and suspensions for the upcoming Dallas vs Seattle Sounders game.

FC Dallas doesn't have any injured player right, now but Brandon Servania got a red card suspension in the team’s latest game against Sporting KC.

There aren't any injured or suspended players from Seattle Sounders right now, so they will be facing their opponents at full strength.

The tables below, contain the latest match histories and recent scores for the MLS match between Seattle Sounders and Dallas on Sunday.

Dallas is nine points ahead of Seattle Sounders in the Western Conference table, and they are also in a lot better form than the traveling team. Most of the times Dallas won against Seattle Sounders was when they hosted the match, like the upcoming Sunday game. We also think that there will be more than 2.5 total goals scored during the match. 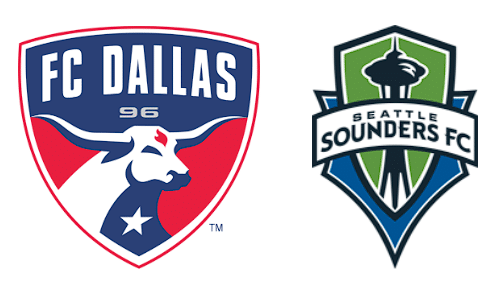 Common Queries About the Dallas vs Seattle Sounders Fixture