Philadelphia Union will be facing Cincinnati on the 19th of June. We will go over the event to make sure you are prepared and have the latest betting lines and top picks. If you want to see more MLS betting picks, you should check out our website.

Betting Picks, Top Lines, and Predictions for the Sunday Match

These are the betting picks we came up with for the upcoming match between Philadelphia Union and Cincinnati. The betting lines above are from the bookmaker platform BetMGM and are subject to change. This means that you should check them out before finalizing your wager.

Three of the last five games for Philadelphia Union and four of the last five matches for Cincinnati ended with both teams scoring goals. We think that Sunday's game also has a big chance of ending with a BTTS outcome the same way two of the last three head-to-head games between the two teams ended.

Recent Injuries and Suspensions for Both Teams

In this section, you can check out the latest injuries and suspensions for Philadelphia Union and Cincinnati before Sunday.

Currently, Philadelphia Union doesn't have any injured or suspended players on their team, so they will be playing at 100% this weekend.

These statistics and match histories will help you with choosing which betting picks to place, so check out these tables.

Our obvious favorite in this game is Philadelphia Union despite all the draws they had recently. Out of the eight games that these teams have played together in the past, only one was won by Cincinnati. We also think that both teams will score during the match this weekend. 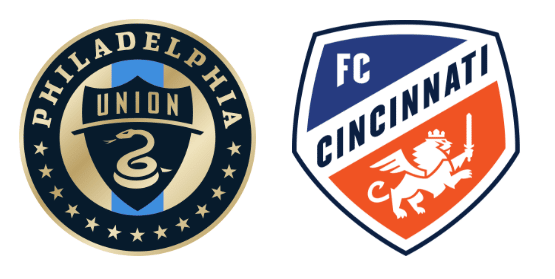