Cincinnati will face New York City on the 30th of June and we will cover the fixture to find the best picks and lines to share with you.

Below, you can check out the Cincinnati vs New York City top free picks, and the betting lines we used came from the BetMGM platform. All odds are subject to change, so go to your bet slip to check if they are different before placing any of these wagers.

Plenty of recent games between the two teams ended with both teams scoring goals, including three of the last five they played. Also, four of the last five matches for Cincinnati ended with a BTTS outcome. Two of New York City's last three games also ended that way.

Latest Suspensions and Injuries for Cincinnati vs New York City

Here, you can check out the most recent lineup changes and injuries for both teams before their upcoming game.

Cincinnati doesn't have any suspended players, but Dominique Badji, Ronald Matarrita, and Junior Moreno are all out with injuries.

The only injured player from New York City is Thiago Martins who has been out a little over a month now with an injury. They don't have any suspended players.

These are the most recent match histories between Cincinnati and New York City, including the recent bookmaker odds from top platforms.

New York City has been dominating Cincinnati in all of the head-to-head games they played together. All seven of them ended in favor of New York City and they are also in a better position in the Eastern Conference table. We also think that there is a high chance both teams will score during the game. 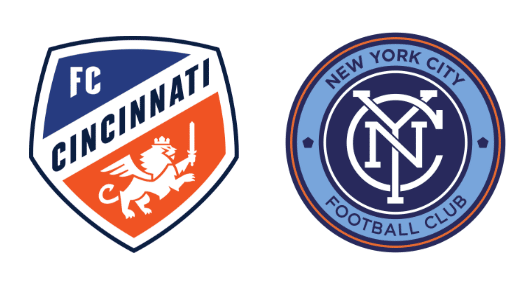