Let's go over the MLS match this weekend between Chicago Fire and Cincinnati. If you want to see more MLS odds and picks, don't hesitate to check out our website's latest content.

Here are the top free picks and betting lines for the Chicago Fire vs Cincinnati match this weekend. All odds are from BetMGM and are correct at the time of writing. Make sure to check your bet slip for any changes before placing these bets.

We think that it's rather likely that both teams score during Sunday's match because we have seen that very same outcome in many of the matches involving them. For example, three of the last five matches for Cincinnati and Chicago Fire (separately) ended with a BTTS outcome. Also, two of the last three times that Chicago Fire and Cincinnati played together, the match ended the same way.

Injuries and Suspensions for Chicago Fire vs Cincinnati

In this section, you can check out the latest Chicago Fire vs Cincinnati injury and suspension news.

The only injured player from Chicago Fire is Kacper Przybylko who got sidelined because of an injury he suffered in April. There aren't any suspended players on the team.

Three players from Cincinnati will miss Sunday's match because of injuries, while there aren't any suspended players. The injured players are Raymon Gaddis, Alec Kann, and Ronald Matarrita.

These are the most recent head-to-head data and bookie odds for the Chicago Fire vs Cincinnati MLS match.

Our Conclusion for This Weekend's Game

Chicago Fire is in the worst form right now out of all teams in the Eastern Conference. Cincinnati has a chance to climb further in the table than their fifth place. We also think that both teams scoring will most likely be the outcome this weekend. 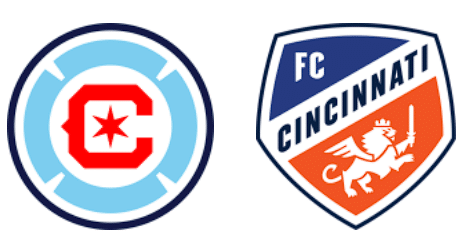