A match between two teams in the lower parts of the Western Conference table will be taking place on the 29th of May. Today, we will check it out to find the best free picks, odds, and predictions.

Free Picks and Top Betting Lines for the Sunday Match

We went through the data and found the top three best betting picks for the upcoming fixture between LA Galaxy and Austin. All odds are from BetMGM and subject to change. Before you place any of these bets make sure to double-check the prices.

Four of the last five matches for both LA Galaxy ended with more than 2.5 total goals scored. We think that Sunday's match will also end on the high-scoring end of the spectrum, as well because of those recent games for both teams, even though we haven't seen a high-scoring game between the two teams in history.

Recent Injuries and Suspensions for LA Galaxy vs Austin

Here, you can check out the most recent injuries and suspensions for the upcoming MLS game.

Currently, LA Galaxy doesn't have any suspended players, but three of their own are out with injuries – Sacha Kljestan, Adam Saldana, and Jorge Villafana.

Austin doesn't have any injured or suspended players right now, so they will be playing at 100% this weekend.

The tables below contain the most recent bookmaker odds, head-to-head stats & scores for the LA Galaxy vs Austin match.

Who Will Take the Three Points on Sunday?

We think that the hosts have a better chance of winning this weekend not only because they are going to play at home, but also because they have been in a better recent form. Also, based on recent games for both teams, we think that there is a high chance the match will end with more than 2.5 total goals scored by both sides. 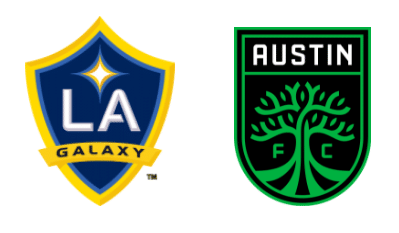