After two games in the new MLS season, Atlanta has 1W and 1L while Charlotte comes to this game with two defeats. We have a detailed preview of this match in this post as well as free betting picks by Football Whisper tipsters. Read further for more.

Atlanta and Charlotte will meet for the first time in the history of the clubs, so we expect a match where both teams will test each other on many factors. Most importantly, Charlotte looks to get their first victory in the MLS. The following are the two best two predictions and tips for this MLS game.

We settle on Atlanta to win this game due to several factors. The hosts have had one game end in their favor from two fixtures so far while Charlotte has lost both its first two games in MLS this season. Five wins and two losses from the last seven games for Atlanta compared to Charlotte’s four losses in the last five is a clear indication of which side is stronger ahead of this MLS fixture.  There is also the question of home advantage that favors Atlanta.

Looking at how these teams have performed in the final third, Atlanta takes the mantle. The hosts scored 9 goals from the last five games despite failing to find the back of the net on two occasions. On the flip-side, Charlotte’s struggle with poor defending is not the only problem the visitors have ahead of this trip.

Charlotte has also done poorly in converting chances, only managing to score one goal in the last five games. With that, we see Atlanta getting on the score sheet first. We are tipping home team to win the first half of this game due to their better scoring average.

We have the latest stats, team form and the best odds for this MLS fixture between Atlanta and Charlotte in the tables below.

Atlanta will be without Miles Robinson who picked a second yellow against Colorado Rapids in the last game. Luiz Arajo is away due to injury. We expect the front line to remain the same with Martinez, Lennon and Wolff expected to start upfront.

The visitors will have full squad available for this third game of the 2022 MLS season. And given that this will be the first meeting between the two teams, we expect a match that could end either way. 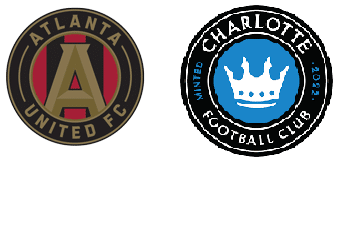 Where will this MLS game take place?

Atlanta vs Charlotte game will be played at the Mercedes Benz Stadium in Atlanta, USA.

What time will the MLS game kick off?

The kick off time for Atlanta vs Charlotte MLS game is 23:30 GMT +3

When is Atlanta hosting Charlotte for this MLS match?