A-League's two inconsistent outfits are in action in this late midweek fixture. Both Perth Glory and Newcastle Jets are out of the playoff slots and have an uphill task in realizing this objective.

Jets to get something from HBF trip

Wellington Phoenix became the latest vanquishers of Perth Glory as they earned a hard-fought 2-1 victory. Newcastle Jets will have similar designs as they arrive on the Gold Coast. The inland club has earned two wins in succession and have the form on their side. With the Glory winless in their last eight A-League outings, it is difficult to expect the Jets to come empty-handed from their trip to the HBF Park.

Dramatic scenes at both ends

Neither Glory nor Jets can be used as examples for consistency in getting results. However, they can be relied upon to have their defences breached and their rivals breathing down them in their own third. The hosts have shipped in ten goals in their last five outings, while the visitor's tally stands at seven. As they come together, we expect plenty of goals at either end of the pitch as has been the case in their recent duels. Both sides have scored in the last seven encounters between them and the trend should continue in this meeting.

Perth Glory vs Newcastle Jets: Check out the best odds and the latest stats

Perth Glory vs Newcastle Jets: Check out the team lineups

Richard Garcia's reign at the head of Perth Glory came to a close as their A-League struggles continued. Ruben Zadkovich has been handed over the reins on an interim basis as Tone Sage and the Glory hierarchy look at possible options. Zadkovich's first order of business remains better results and return to the playoffs, a tough task as they are 11 points adrift heading into their next outing.

While Glory has found it difficult to appease their fanbase, Newcastle Jets have it easy to frustrate theirs. They are three points away from the playoff slots and should have had it in their grasp had they not been this inconsistent. Bouts of miserable performances have been followed by exuberance. The Jets faithful will be pleased at the moment as their side is on the upswing with successive victories but will have their fingers crossed. 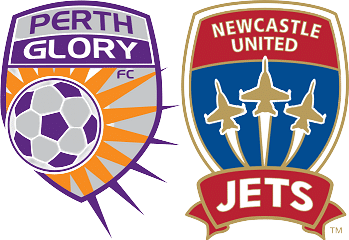 Who won the last h2h? The last two meetings between Perth Glory and Newcastle Jets finished as 1-1 draws.