McDonald Jones Stadium will be the venue for Newcastle Jets and Adelaide United's A-League sparring on Sunday, January 30. The Jets have a stern fight on their hands as United are unbeaten in four league outings.

Adelaide United to Win or Draw

Adelaide United to Win or Draw

Newcastle Jets have struggled with form and coronavirus delays this season. They have managed to win just once with two draws and as many defeats in their five A-league appearances this season. On the other hand, Adelaide United have impressed this season and are on a four-match unbeaten run. They have only lost once in their seven away fixtures across all competitions, making the double chance selection an easy one to make at 61/100 odds.

Despite the six-point gap and as many league places between them, Newcastle and Adelaide have similar goal scoring antics. They prefer attack over the defence and the numbers speak for themselves. The Jets have scored 10 times in A-League this season, while United have 14 to their name after playing four more games. With both sides showing scoring efficiency, we are backing a high scoring affair at the McDonald Jones Stadium. The Jets' last seven fixtures have concluded in this manner and this meeting should follow the trend.

Newcastle Jets vs Adelaide United: Check out the best odds and the latest stats

Newcastle Jets vs Adelaide United: Check out the team lineups

Despite finding Newcastle Jets in 11th place in A-League rankings, Arthur Papas will not be much concerned with their standing. The Jets have found limited playing time and have only five league games under their belt as they head into Round 12. Moreover, with goals coming easily for them, they will be confident in moving up the rankings as they make up the fixture gap.

Carl Veart will be pleased with how Adelaide United have continued in the same vein as last season. United are unbeaten in four league outings and can move up to one-point of league leaders with a win against the Jets. Cheif to their rise has been their scoring efficiency but have to be wary of their backline that has easily been trumped over. 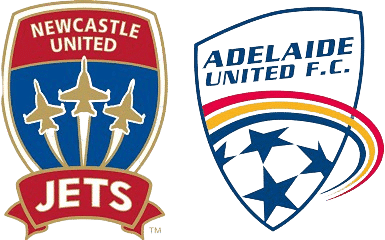 Who won the last h2h? 1-4 in favour of Adelaide United.

Where is the game being played? McDonald Jones Stadium.